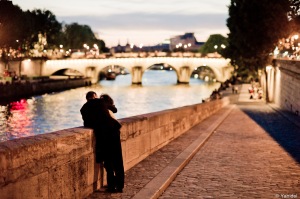 Straight people cruise one another in Paris; unlike Americans, who feel menaced or insulted by linger looks on the street, French women-and men!-consider la seduction to be one of the arts of living and an amorous glance their natural due.  When I lived for several months in the States with a young French man and woman, they were puzzled and hurt at the end of their first American week by the lack of attention they were receiving. ‘Maybe Americans don’t like our looks’ they asked.

I had to explain to them that American style feminism had retrained men not to ogle women – but that, more significantly, Americans consider the sidewalk an anonymous backstage space, whereas for the French it is the stage itself.

~ Edmund White, The Flaneur: A Stroll Through the Paradoxes of Paris

French culture has always interested me, and as a lot of my family has lived, lives, or have gone to school there I have been exposed to a healthy dosage of it. I found this excerpt above interesting because it does allude to something real. A women had this to say about her visit to Paris:

Men were very vocal.  The Frenchmen did not consider what they were doing insulting, it was truly appreciative in nature. Men would openly stop and LOOK, they would turn around and LOOK, they would yell compliments, in English and French. Our favorite of all was the “Meow”.  Yes, they would meow, which was something I had only read about!  It is done as a mix between saying the word, and speaking it as a cat would. Well done it is an art.  The French have perfected it.  My favorite “Meow” of all was from a group of workers, clinging to girders far above us as we visited the Eiffel Tower.  We turned and waved, and they waved back and showered us both with compliments to our beauty.

That wouldn’t fly in America. Political and sexual correctness rule the day. An innocent compliment can lead to a world of pain. We do not tend to make a difference most times between predatory and non-predatory expression of male sexuality. Quite often it all gets lumped together. To quote from the article: Why Do We Demonize Men Who Are Honest About Their Sexual Needs? –  The pressure put on men to be initiators, yet avoid seeming creepy or aggressive leads to an unpleasant double bind.  It’s a catch 22 in many cases. This whole issue of harassment, and the double binds brings to mind a bit from Patrice O’ Neal called harassment day

Masculinity is a Plague to some

But to get back to it there was an interesting documentary called “The Mask You Live In,” made by feminist filmmaker Jennifer Siebel Newsom. (You can see the trailer here.) She equates masculinity to a plague that is sweeping through America. Supposedly “at a young age, boys learn that to express compassion or empathy is to show weakness. They hear confusing messages that force them to repress their emotions, establish hierarchies, and constantly prove their masculinity. They often feel compelled to abide by a rigid code of conduct that affects their relationships, narrows their definition of success and, in some cases, leads to acts of violence resulting in what many researchers call a “boy crisis.”” While that touches on  some elements of a crisis it is very skewered view.

If I can be honest every time I see a feminist writing something on masculinity or men, I have a general feeling that I am about to read a big nutty brown pile of bullshit. Everything is seen through a narrow lens of the feminist movement which is at its very core, xenophobic, classist, racist, and elitist. Many follow the narrative that:

Historian Ellen K. Rothman showed in her exhaustive work “Hands and Hearts: A History of Courtship in America”, that American men were masculine in the 1800s  but learned to be vulnerable and share confidences during courtship. This candor during courting resulted in marriages between compatible partners that were designed to last a lifetime despite incredible hardships and unbelievably primitive living conditions, providing a safe and secure environment for children to grow up healthy. Sadly, in the last century the media of music, movies and later television and the internet promoted a mutated form of courtship that emphasized physical attraction and charm over character and compatibility. The resulting weak relationships between strangers led to a steep decline in marriage with more and more Americans abandoning marriage altogether.

Just like individuals do, I think as a nation we have a shadow. There are many soul crushing episodes of our history as a nation that we haven’t dealt with that linger. If certain conditions are met this issues will quite often violently way make their presence felt. Human history is a volatile thing. Today’s subjugated just may in enough time become the oppressors. We become the very thing we hate I mean look at Israel and what’s being done to the Palestinians.

I think that the centuries long suppression of both the feminine and women has left many scars on our psyche. While we work to address the consequences of this legally, economically etc, there is much more that we have to do to address those scars internally that we all carry because we each whether male or female have to work at balancing the masculine and feminine energies inside of us.

The suppression of the feminine didn’t just hurt women, it stunted the development of men for centuries. The demonization and criminalization of masculinity hurts not just men but women too.