HONORING MANDELA: DONT LET POLITICIANS WHITE-WASH HIM, REMEBER WHEN THE USA CONSIDERED HIM TO BE A TERRORIST.

As a young kid, there were a lot of black men I looked up too. Then again being  approximately 3 feet tall made all the basketball players I saw that one day at Madison Square Garden seemingly Titanic. There were few black men however that I revered. Nelson Mandela was one. He has been a source of pride, and an inspiration for oppressed people all over the world!

Within the next 48 the world will be inundated by speeches glorifying Mandela from people many who were on the wrong side of history, and many more who continue to work to ensure that scores of people remain disenfranchised, and continue to view freedom as a myth. People like former  Vice President Dick Cheney, the once and future vegetable President Ronald Reagan, and who can forget Our Lady of Charity herself, Margaret Thatcher, who decided that Mandela and the ANC where a terrorist organization. Actually Dick had this to say: “The ANC was then viewed as a terrorist organization,” Cheney said on ABC’s “This Week.” “I don’t have any problems at all with the vote I cast 20 years ago.” Cheney went on to call Mandela a “great man” who had “mellowed” in the decade after his release from prison.

How to Honor Mandela

So the million dollar question at this moment is: How to honour a man who you revere.

Well the first thing you don’t do is use his likeness on a shirt or mug. Some mega-massive corporation will buy the rights, and use the profit off the paraphernalia to destroy some national treasure like how when Walmart did in Mexico.

One way to honour Mandela’s legacy to actually learn about it. One place to start is with the things not many people will mention like from this site:

Here are 6 things no one will mention about Mandela

Quoting from the above article:

“Mandela was a political activist and agitator. He did not shy away from controversy and he did not seek — or obtain — universal approval. Before and after his release from prison, he embraced an unabashedly progressive and provocative platform”As one commentator put it shortly after the announcement of the freedom fighter’s death, “Mandela will never, ever be your minstrel. Over the next few days you will try so, so hard to make him something he was not, and you will fail. You will try to smooth him, to sandblast him, to take away his Malcolm X. You will try to hide his anger from view.”

I remember Wislawa Szymborska said in her column giving advise about writing poetry the following words: “You’ve managed to squeeze more lofty words into three short poems than most poets manage in a lifetime: ‘Fatherland,’ ‘truth,’ ‘freedom,’ ‘justice’: such words don’t come cheap. Real blood flows in them, which can’t be counterfeited with ink.” 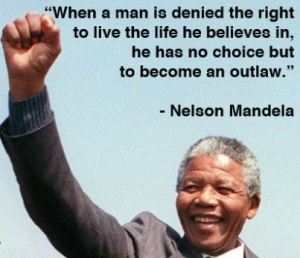 We cannot counterfeit freedom with the fancy speeches. As Americans we have to come to terms with the fact that while we talk  a lot about freedom, we as a nation do much to deny it to others. This is part of Mandela’s legacy that speaks the loudest to me:

The CIA was instrumental in Mandela’s 1962 arrest

Reagan vetoed the 1986 Anti-Apartheid Bill, which called for harsh sanctions against South Africa: “Immoral and utterly repugnant” were the words he used to describe the proposed sanctions.Reagan also placed Mandela on the terrorist watch list. Same Reagan who opposed the Civil Rights Act of 1964 and the Voting Rights Act of 1965 and said Jefferson Davies was a hero of his.

A Jack Abramoff-led think tank, called the International Freedom Foundation, was actually a front for the South African government: The group — which also had links to former Sen. Jesse Helms — funneled as much as $1.5 million a year into public relations efforts designed to boost the apartheid regime while discrediting Mandela and the African National Congress.

Reagan also placed Mandela on the terrorist watch list and there he stayed until 2008.

Ultimately many times America has been on the wrong side of history, but I don’t think the future is grim (probably because I  don’t believe in karma). I think what I would like, what Mandela’s legacy speaks to can be summarised by these words by Marcus Aurelius: The object of life is not to be on the side of the majority, but to escape finding oneself in the ranks of the insane: racism is insane, poverty is insane, imperialistic and neocolonial policies are insane, not assisting our fellow citizens and countrymen in their plight is insane.

I hope that in the year to come there will be more of a move away from insanity.