“The problem was you had to keep choosing between one evil or another, and no matter what you chose, they sliced a little bit more off you, until there was nothing left. At the age of 25 most people were finished. A whole god-damned nation of assholes driving automobiles, eating, having babies, doing everything in the worst way possible, like voting for the presidential candidates who reminded them most of themselves. I had no interests. I had no interest in anything. I had no idea how I was going to escape. At least the others had some taste for life. They seemed to understand something that I didn’t understand. Maybe I was lacking. It was possible. I often felt inferior. I just wanted to get away from them. But there was no place to go.”
—Ham on Rye, 1982 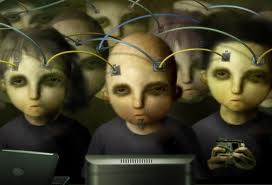 I love the education I received from my all Boys Catholic Prep, I had some great teachers that recognized my abilities and helped me with advice through some salient moments during that time. I didn’t really fit in with a lot of my fellow students, our words, economic status, methods of linguistic expression, values, colloquial accents were too different. I made three really good friends. I didnt know why I didnt feel comfortable around them.

Now years later I feel it was the stank of mediocrity and security. I felt everyone had their life planned out for them, college marriage good job, or job in the family business. I studied and read because I was curious about the world, and I loved learning. A lot of them even in the honors and advanced classes I was in  they did well but just to make that piece of reality, that trust fund, that promised car more real.  There is no greater love than a love with no purpose. I loved someone like that once and it was a like a category 5 hurricane in life, just loved them not for what they did or looked liked, for no reason.

I did  well in the classes, but it was a handicapped race as I felt, nothing to come home to aside from sadness, hunger and some other stuff. I thought I would share a convo I had with a former classmate i bumped into recently at Penn Station. It’s pretty foul at times, you’ve been warned

MrFacelessIncurious: Oh Hey MrMary’s RealName, Holy Shit, haven’t seen ya in like a fucking decade
MrMary: What’s good baby, how are ya ?
MrFacelessIncurious: I’m good man and you
MrMary: Well my prostate isn’t as big a grapefruit, it’s regular sized
MrFacelessIncurious: Wtf ?
MrMary: I just came from my girl-friend house,…..
MrMary: She has this cute slender fingers and no rings
MrFacelessIncurious: You’re fucking crazy still, so you finally got laid fucker?
MrMary: Yeah your moms was great, very motherly she wet-napped me, and made me something to eat
MrFacelessIncurious: STFU Your moms dude banged guys 10 ata time for a dime (old joke)
MrMary: Dude you know I’m black, in between prison and eating fried chicken my gerontic overweight grandma raised me, I never knew my moms

<joint laughter>…… <……here it comes….>
MrFacelessIncurious: You should come hang out a lot of the guys from our class hang
MrMary: <suppressing the need to vomit> Yeah…we should do that
MrFacelessIncurious: Yeah man YOU SHOULD… we play poker, we drink some, watch the game
MrMary: Ah the Game…. yeah the <Random NYC baseballs, basketball, footbal, hockey team>
MrFacelessIncurious: they are not doing so bad …huhn? <prepare to tune out>
Yeah not so bad …blah blahblah….

MrFacelessIncurious: So let’s sit down here and eat something, or have a coffee
MrMary:  Uhm sure, I could use a a drink, I left my flask at work This Moca choca limp-wristed bullshit will have to do

MrFacelessIncurious: Man Obama he is fucking this place up
MrMary: Really? – Yeah I thought it was the stench from the homeless and the current fractured global social structure precipitated by the Cold War.
MrFacelessIncurious: lol ..yeah that too I guess,…. Uhm yeah… Im glad I didn’t vote for him
MrMary: Yeah I dont, vote
MrFacelessIncurious: You don’t vote?
MrMary: Yeah, I don’t, it’s like blowing air into a womans vagina
MrFacelessIncurious: uhm…wtf are you on dude
MrMary: No good can come from blowing air in a womans vagaina
MrFacelessIncurious: uhm explain that  ?
MrMary: Well when air is blown or forced directly into a vagina without lettign it back out into the world an air embolism can form, but you know it rare, and well its proves my theory that blowjobs can kill… esp at Vegas prices
MrFacelessIncurious: I meant the voting ….
MrMary: Oh that’s easier Ahem Incompetent syphilitic leaders are the final product of an incompetent syphilitic society. To vote is really an exisential question wrappped up in a mental and spiritual propholactic latex. It forces you to ask who you are, but you can only answer that according to social/cultural convention which paints a picture of man as beign extremely egregiously limited. You can applaud me now
MrFacelessIncurious: People Died so you can vote
MrMary: I doubt during the civil war the northerns actually liked black people, they felt slavery was wrong but they still dont like us. Also in heavy fire I dont imagine someone saying: “I reckon their will be some coon/negro/darkee/monkey/eggplant boy born August 5 in NYC 200 years from now named MrMary’s real name. I am going have my mortality fatallysodomized by some bullets for him. Plus people died for the right for me to vote.
MrFacelessIncurious: That sounds a bit unpatriotic, and loud man all Dunkin Donuts is listening … chuckles…I don’t know what to tell ya
MrMary: It is as patriotic as older gay men dying from AIDS when Magic Johnson is still opening up Starbucks and Movie theatres. As for our fellow patrons they all can go on Dunkin Deez Nutz…. and no one know what to tell me – that’s why I choose women to date by their finger size, and eat farina in the morning. it’s a lot less talking more and more grimacing

MrFacelessIncurious: yo, take my # down, so we can hang
MrMary: Sure… Here a napkin
MrFacelessIncurious:  Want me to kiss it for you and leave my lip outline on it with my number
MrMary: Your mom taught you well, When I come over I’ll show you the napkin she left me, Her cell starts with 1-646-251 doesn’t it
MrFacelessIncurious:  Go fuck ya self
MrMary: I’m saving it all up for the election day,….. <laughter> you know … that night we will both be at the poles  but I wont be fooling myself, at least not to much at first….gotta ease into it, you’re married must spend a lot of time prodding your inner Protestant
MrFacelessIncurious: Nah I get mines
MrMary: yeah obviously but not from your wife, im guessing yourself and a random moisturizing bar
MrFacelessIncurious: Lol nah …where do you come up with this shit man, your worse than in HS
MrMary: I was married once
MrFacelessIncurious: Oh yeah what happened?
MrMary: I stopped abusing Oxycodon, and realized it wass a dream
MrFacelessIncurious: Seriously ?
MrMary: Nah playboy… I only abuse myself on election day to make a statement before the ‘inspiration’ dries up
MrFacelessIncurious: lol funny bastard…if you don’t care about politics what do you care about
MrMary: it’s not about caring I feel, it’s about doing what I am called to do and taking care of my responsibilities
MrFacelessIncurious: You gonna get all philosophical intellectual on me
MrMary: Im neither, philosophers and Intellectuals dont like fucking, and are quite effete in that realm. Although I would say being able to make your mom recite Joyce (Once upon a time and a very good time it was there was a moocow coming down along the road and this moocow ) that gave me more street cred with the older ladies…shit might go crash a bingo game right now
MrFacelessIncurious: whats up with the mom jokes…
MrMary: I never grew up, still wear tighty whiteys see

I was really happy for MrFacelessIncurious. He is successful, has two girls and is very very fat. I don’t think he can fit into the HS we used to go to. But I feel there will never be nothing new I cannot predict already: diet soon, trying to work out again to fit into one-seater on the train, stop eating red meat, to reduce the high blood pressure, excessive talking and drinking at either Yankee Stadium or the Meadowlands, wife will cut her hair short after their third kid or  in a year and complete her transformation into an amorphous sedentary  protoplasmic dullard. Not that there is anything wrong with that, then again I might just be an asshole today.

On a side note, I didn’t call but we are on facebook now. And I would rather spend that time interacting with you guys, the reader of this blog. If I will continue being honest, I must admit that I tend to use humor, non sequitor, and bad manners to keep certain people at bay lol.  I’m all about being sincerely friendly and sharing laughs/limp-wristed coffee drinks, and have fun.

Side note: I call my fellow classmate MrFacelessIncurious from a  line in a poem by Samuel Beckett a fellow Irishman. Here are the lines